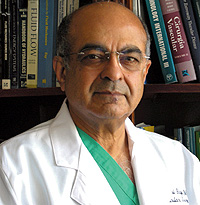 Dr. Seshadri Raju received a Doctor of Medicine degree from Christian Medical College in Vellore, India, after which he completed a 5 yr. surgical residency in that institution and was certified. After immigrating to USA, he again repeated general surgery and cardiothoracic surgery residencies at the University of Mississippi Medical Center (UMMC) receiving Board certification in those specialties. He also holds Board Certification in Vascular Surgery. He subsequently joined the UMMC faculty and retired as Emeritus Professor of Surgery and Honorary Surgeon after 27 years of service . He is currently in private practice specializing in venous and lymphatic diseases. Dr. Raju is a founding member of the American Venous Forum, the premier organization for venous disease, and a Distinguished Fellow of the Society for Vascular Surgery. He is a Fellow of the American College of Surgeons and a member of numerous other national and international specialty societies in Transplantation, Vascular Surgery and Phlebology. He has over 250 wide ranging publications including peer reviewed articles, book chapters and a book on Venous Surgery (Williams & Wilkins). He has been a guest speaker at numerous national and international forums, and often has visiting physicians from USA and overseas observing his venous interventions. He was recently given the prestigious AVF ‘Founders Award’ in recognition of his work in venous disease.